Wife beater. Got your attention, didn't it? It's a highly charged word and by definition, a masculine act of aggression. And then there is the other wifebeater. A slang reference to the blue Chesty Bonds singlet often worn by shearers, truck drivers, labourers - men stereotyped by a dependence on their strong physicality. It's a gross appropriation from insidious act to male stereotype to pop culture terminology. And yet despite its offensiveness and tenuous association, it is a phrase I've heard slip out of the mouths of well-educated friends to describe this type of male attire. This type of wifebeater exists as a blue Aussie icon with strong links to masculine identity and aggression.

In purposefully selecting this provocative phrase, it is the idea of male aggression that Eli Smith seeks to engage with in his new series of paintings. A physically stong man, the artist is very much aware of his own physicality and the relationship between mind and body. He views aggression as a physical type of emotional response that can either be willingly inhabited and destructive, or positively harnessed to allow a natural flow back to balance. He also believes that this idea of 'positive' aggression is slowly disappearing from contemporary society as its integrity becomes tainted by the culture of jingoistic Cronulla riot yobbos.

In pursuit of this idea of positive aggression, Eli chose to explore his own peer group's relationship to the subject by asking them to participate in a relatively aggressive act: wood chopping. Eli's protagonists assumed the role of stereotyped Aussie male by donning the iconic 'wifebeater' singlet, undergoing a quick refresher course in wood chopping, and then hacking into a chunk of wood with ranging success. These sessions were digitally documented and captured a range of individual responses. Transposed into nine paintings, their diversity was reinforced in a variety of styles and formats that reference the artist's own artistic interests and influences.

Portion of catalogue essay by Hannah Matthews, Curator P.I.C.A May 2007 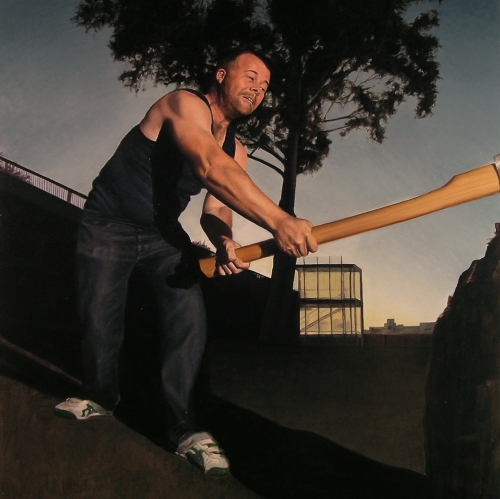