The title for this show describes the viewer's point of view in all of the works - an outsider. These paintings attempt to describe the feeling of being a foreigner in a public space. The original locations of the scenes are based on recent photographs taken in Cuba, Mexico, Greece and also around where I live. Although based on photographs, once entering the realm of paint they transform into places that may only exist in imagination.

Private areas and structures such as doorways, balconies and windows act as a border between the viewer and what may be lurking behind the facade. These architectural surfaces are juxtaposed with seductive translucent ones to create a potential dialogue that both draws the viewer in but prevents them from entering. Dense green vines creep around the solid buildings as if leading you to peer into the unknown areas behind, yet also act as an obstacle that may be blocking your path. Exsisting in a recognisable and familiar present, these works still offer a sense of dislocation and awkwardness that keeps the viewer guessing. 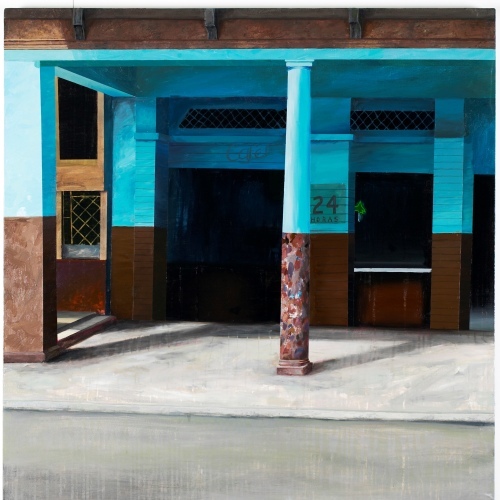