Everybody needs a secret hideaway.

This new series of works titled 'Hideaway' explore the narrative potency of empty houses by creating an interaction between loose, painterly surfaces and solid life-like structures. The original locations of the scenes are based on recent photographs taken in Cuba, Mexico, Greece and also around Perth where I live. Although based on photographs, once entering the realm of paint they transform into places that may exist only in the imagination.

Private areas and structures such as doorways and balconies act as a border between the viewer and what may be lurking beyond the facade. These uncanny spaces hint at an ambiguous world in which to take refuge - part abstraction and part reality. Architectural surfaces are juxtaposed with seductive translucent ones to create a potential dialogue that both draws the viewer in but prevents them from entering. Dense green vines creep around the solid buildings as if leading you to peer into the unknown areas behind, yet also act as an obstacle that may be blocking your path. Existing in a recognisable present, these works still offer a sense of dislocation and awkwardness that keep the viewer guessing. 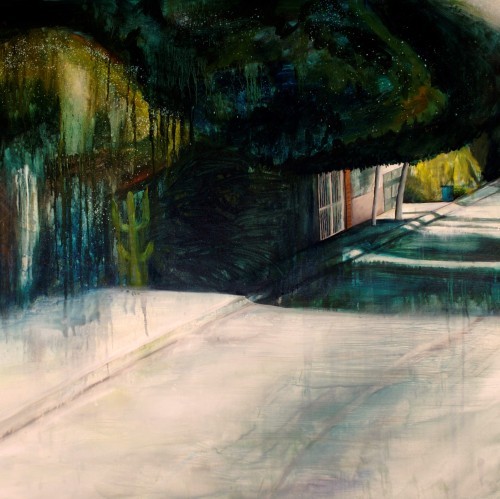